Digging deep into John 5:1-18 to examine the historic nature of the passage, as well as the theological significance.

The Healing at the Pool on the Sabbath

1 After this there was a feast of the Jews, and Jesus went up to Jerusalem.

An Unknown time has past since we last saw Jesus healing in Galilee. He has traveled from Jerusalem, and the Passover feast, to Galilee, and is now back in Jerusalem. In short, the feast is unknown, but if it’s the Passover, it could be as much as a year that has passed.

2 Now there is in Jerusalem by the Sheep Gate a pool, in Aramaic called Bethesda, which has five roofed colonnades.

The location of the pool, near the sheep gate has been known for years but recent archaeology has been able to confirm it. The other important thing of note is the name of the pool means house of olives, or house of healing.

3 In these lay a multitude of invalids—blind, lame, and paralyzed.

4 For an angel went down at a certain season into the pool, and troubled the water: whosoever then first after the troubling of the water stepped in was made whole of whatsoever disease he had.
KJV

Verse 4 is missing from manuscripts before the 400’s AD, and isn’t in most modern bibles. It’s not that people are tampering with scriptures, but the King James translators put it in, when it wasn’t originally there. It was likely added to offer a reason why the waters stirred. In later manuscripts, where the verse does appear, there are lots of variance in how verse 4 should read.

No doubt, many sick folks gathered for healing. The word for invalid, or impotent is one where we get the word strengthless.

5 One man was there who had been an invalid for thirty-eight years.
6 When Jesus saw him lying there and knew that he had already been there a long time, he said to him, “Do you want to be healed?”

38 years in bed. This man must have been thin, weak, frail, ridden with bed sores. Possibly elderly. After years of discouragement, his will may also have been broken. Was Jesus also offering to heal his will, his spirits? With such a long time in bed, even if he hadn’t spent the entire time waiting near the pool, he certainly would have had plenty of folks who knew him, and could attest to his sickly condition.

7 The sick man answered him, “Sir, I have no one to put me into the pool when the water is stirred up, and while I am going another steps down before me.”

The man described his plight. He believed his healing would come from being put into the water. As a disabled person, he had to rely on others. At their convenience, not his. he couldn’t move under his own power. He had to rely on others who didn’t have to suffer his constant troubles, and could come and go as they pleased. He was always bumped to the end of the line, so to speak, by others more abled. His hope was gone, and he was in despair.

What is missing in this picture? Did the man ask for healing, or help to the water? No.

Did Jesus ask what the man might want from him, or about faith? No.

Jesus saw him. And commanded. Get up, take up, walk.

It was all on Jesus. The man already had Jesus attention. He supplied the physical healing, and the healing of the will.

9 And at once the man was healed, and he took up his bed and walked. Now that day was the Sabbath.
10 So the Jews said to the man who had been healed, “It is the Sabbath, and it is not lawful for you to take up your bed.”

Two things. He was healed, it was sabbath.

Religious leaders were more bent out of shape over carrying a bed, than being blessed at the healing.

I suppose he could have left the bed, and been more inconspicuous. The religious leaders might not have even noticed him. But Jesus said to take it up, so he got up, took up the bed, and was spotted as he carried it around. 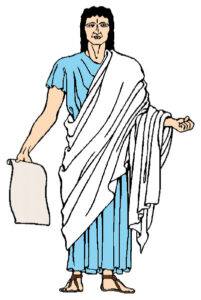 Was he ungrateful for the healing? Probably not. Was he passing blame onto Jesus for the crime of carrying his bed? How about this, he was pointing to authority. Jesus as authority over both sickness, and sabbath. At this point though, the healed man didn’t know Jesus name.

13 Now the man who had been healed did not know who it was, for Jesus had withdrawn, as there was a crowd in the place.

The man didn’t know who Jesus was, only that he was healed. Similar to other Sabbath healings, Jesus slipped away. Is this proof of Jesus immunity to danger, until it was his time? Some commentators think so. at the least, Jesus was very astute and practical in stirring up controversy. You decide.

14 Afterward Jesus found him in the temple and said to him, “See, you are well! Sin no more, that nothing worse may happen to you.”
15 The man went away and told the Jews that it was Jesus who had healed him.

Jesus sought him again. The first time to heal the body. Now to heal the soul. The warning to “sin no more” might imply the disability was due to past sin. Healing can come even without spiritual transformation. Now that the man was enjoying his first steps as a healthy person in ages, Jesus wanted to give him the chance to know him more fully, and get his spiritual life in order. We find in other gospels that when an evil spirit is cast out, it can return with even more evil spirits. Whatever sin was behind this man’s illness, without Jesus he was still in danger of losing this sudden progress.

Now that he knew who Jesus was, the man sought the religious leaders. Was it betrayal, or just earnestly wanting to answer their earlier question?

16 And this was why the Jews were persecuting Jesus, because he was doing these things on the Sabbath.

The problem was that the religious leaders went too far in making customs and their interpretations of the law more strict than the actual law. They saw healing, and carrying, as work. Breaking the 4th command to keep sabbath holy. Any challenge to their ideas seemed to them to be a threat to their power and control.

17 But Jesus answered them, “My Father is working until now, and I am working.”

Laws of nature take no holiday. God works on sabbath. Jesus doesn’t claim to be God, only that he is in close relationship with God. Father and son. He identifies as doing the same works as god. Though God invented sabbath, and he rested from his work of creation, he is always at work in rescuing people from their sinful condition,

Jesus Is Equal with God

18 This was why the Jews were seeking all the more to kill him, because not only was he breaking the Sabbath, but he was even calling God his own Father, making himself equal with God.

Though the claim to being in sonship with God, didn’t directly claim he was God, the meaning wasn’t lost on the Jews. The belief is that there is only one God, not multiple gods. The idea of someone being made of the same stuff as God, father and son, was mind blowing. It would make the son of equal standing with his father, God. Also, to the Jewish mindset, men (and women) were born out of their parents. by extension, people were born from tribes or nations, each being thought of as from a motherhood. If anything God fathered nations, he didn’t father Individual people.

This new concept, and early hint at a God with three natures, while of one kind of being (trinity) would take time to be understood. Even today there is plenty of mystery surrounding the topic.

In the show, Nathan brings things to a point for us, and highlights the way we, like the sick man, look for cures in the wrong places. When Jesus makes us whole, he has the power to do it immediately, completely, permanently, and affecting body and soul.

Scripture on the page are from the English Standard Version, unless otherwise noted.

in the episode, Keith reads from the ESV, while others quote the KJV. this is for comparison, to see how different translators deal with the original Greek in presenting it in English.

consider supporting the podcast through our Patreon page.

Don’t forget about the Christian Podcast Community Give Away to win the shot at a grand prize of over $1000 in theological resources. the contest ends February 29, 2020, so don’t delay to enter and earn as many points as possible.